LIONS AND LOBSTERS AND FOXES AND FROGS

Be the first to review this product
$27.99
In stock
SKU
9780486820170
Add to Wish List Add to Compare
A new approach to Aesop's ancient fables features charming rhymes and winsome images. Edward Gorey sets the scenes for Ennis Rees's verses, which recount how animals with all-too-human failings receive their just desserts.
Skip to the end of the images gallery 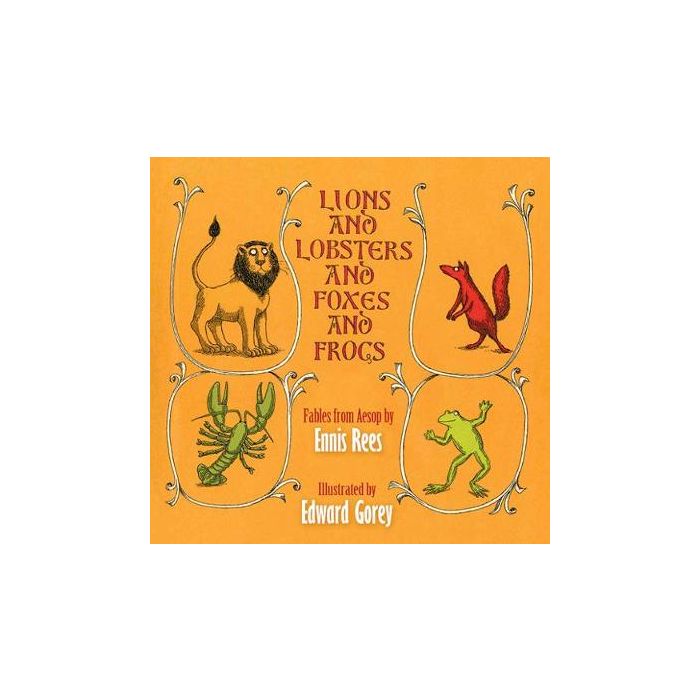 Skip to the beginning of the images gallery
Details
A new approach to the ancient fables of Aesop features charming rhymes and winsome images by a beloved illustrator. In this beautiful hardcover treasury, legendary artist Edward Gorey sets surrealistic scenes for poet Ennis Rees's verses, which recount how animals with all-too-human failings receive their just desserts. Memorable renderings of familiar and lesser-known vignettes include fables of the industrious Ant and the lazy Grasshopper, the mighty Lion and the tiny Mouse who comes to his rescue, and other timeless tales. AGES: 7 to 12 AUTHOR: American poet and professor Ennis Rees (1925 2009) was the author and translator of many books for adults and children. He was also the third South Carolina Poet Laureate, serving from 1984-85. These fables are from his 1966 book, Fables from Aesop. American author and artist Edward Gorey (1925 2000) combined whimsy and dark humor in such illustrated books as The Doubtful Guest, The Gashlycrumb Tinies, and four Amphigorey anthologies. His distinctive style, featuring characters in Victorian dress in surrealistic settings, achieved wide recognition with his opening-sequence animation for the PBS Mystery! series.
Reviews
Write Your Own Review
UOW Pulse ABN 28 915 832 337